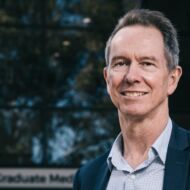 Hi there, I'm Jo Cheah, your host for this episode. Today I'd like to welcome Professor Nick Zwar. Nick has written the article ‘Travelling with medicines in 2018’, which you can read in the August edition of the Australian Prescriber. Nick, welcome and thanks for taking the time to speak with me today.

So, to start let's say that a patient walks into the pharmacy and says that they're planning to travel, and they ask you for some advice. What are some of the most important things that we should keep in mind and tell our patients before they travel?

Well I think the key issue Jo is really people planning ahead because getting organised means having enough of their regular medicines that are in date for the duration of their trip. It may also mean having a doctor's letter that summarises their medicines and it can also mean understanding how they look after their medicines during travel and what to do if things go wrong along the way.

So what sort of things can go wrong?

I’ll just start by saying people need to make sure they have sufficient supplies of their medicines for the duration of travel. People don't want to run out of a regular medicine half way through their trip and then find it's very difficult to get access to that. So, for PBS medicines there is generally no problem taking six months’ supply and of course the doctor can write Regulation 24 on the script to allow the pharmacist to dispense all of the repeats at the same time. For people that have particular health issues such as diabetes it's a little more complicated. One of the things that people sometimes get concerned about is storage of insulin during travel and thinking that it needs to be refrigerated for the whole time. That's not the case and it can travel in the hand luggage on the airplane perfectly safely and I’d suggest not asking the cabin crew to put it in the fridge. It's just a risk of it getting lost. Similarly, with thyroxin tablets, as people who are taking thyroxine will know, it’s generally recommended to keep those stored between two and eight degrees Celsius but that's not necessary for short periods of time such as air travel. The thyroxine medication will be perfectly stable at normal temperatures for several months.

So, you mentioned planning ahead. That involves thinking about vaccinations and also for the countries that Australians are likely to travel to, we may need to consider things like antimalarials as well. So where can we find more information about that and what should we be telling our patient?

It's generally suggested that people go and see their general practitioner or travel medicine provider six to eight weeks before they go away. We know from a number of studies that many people don't do that. Some people do chat to their pharmacist and the pharmacist can have an opportunity to encourage people to seek pre-travel medical advice. There's also a range of very good websites that people could look up. One that's particularly good on general travel health advice is the United States Centres for Disease Control and the website cdc.gov and they just go to travel health and it's got a list of destinations and a list of topics of different sorts of health problems as well. The only thing I'd say is the antimalarial choices that are made in the United States are somewhat different to Australia, so people would need to seek advice from their doctor about particular antimalarials that we use. The other one is the World Health Organization has a travel health section as well, the WHO, and that's very good too. So, there's lots of advice available.

Yeah for both of those reasons really. I think anyone who has chronic, long-term health problems and is on a number of medicines it's really useful to have a health summary with the medicines written preferably in generic format, because of course brand names vary around the world. But it's also very important if people are taking a medicine that may be restricted in some way. That's a really tricky issue because the restrictions do vary from country to country particularly for things like opioids and psychotropic medicines such as amphetamines. And it's quite difficult to know from the websites of the consulate of a particular country what the rules are for that particular place. If in doubt people can contact the consulate of the country they're traveling to. They may not get a timely answer though, so it's really quiet a tricky area and so talking to their doctor about it and if they are going to take an opioid in particular or a psychotropic medication they really do need to have a letter stating it's for them and under their doctor's signature. So people do need to think through that fairly carefully. And if people have had previous heart disease they may want to take a copy of a recent ECG so if they have any sort of difficulty when they're overseas, some chest pain or something and they need an ECG the medical practitioner can compare the one done or during their travel with a previous one. So that's another thing that can be useful.

I'm sure you're aware recently in the media there's been a lot of attention, women on the oral contraceptive pill having the concern of having an increased risk of DVTs when traveling. Do you have any comments or any thoughts about that?

I mean taking estrogens does slightly raise the risk of thromboembolic disease including DVT. It's a very small increase. A much more important risk factor for DVT is having a previous DVT. And the issue of DVT during travel, yes there is some evidence that air travel slightly increases the risk, possibly due to the change in partial pressure of oxygen and if flights are greater than four hours or so there has been evidence of usually subclinical DVTs that nearly always resolve. But the main risk factors are previous DVT, active cancer, so being someone who's been treated for cancer, recent pelvic surgery, recent fracture and interestingly whether you're either tall or short is a risk factor as well. It may be something to do with whether your feet can reach the ground in the plane when you're very short or whether you're cramped in if you're very tall. And of course if people are over 40 it's not a bad idea to wear the below-knee compression stockings. There is some evidence that they reduce risk of deep vein thrombosis during flight and to do the exercises that are recommended in the back of most of the airlines’ in-flight magazines.

Do you have any other general counselling points for traveling in relation to the prevention of malaria or traveller’s diarrhoea or any other common ailments people might have overseas?

Well I guess in malaria the saying ‘less bites, less risk’ and whatever people can do to reduce mosquito bites is helpful. So, putting on personal repellent, sleeping in screened accommodation or air conditioning, using knockdown sprays, all of those things. People need to realise and not everyone does that malarial-carrying mosquitoes, Anopheles mosquitoes, bite overnight from dusk to dawn and if you're in a rural area in a malarious country overnight that's really when you're most at risk of getting infected with malaria. And the other one to mention here is daytime-biting mosquitoes which transmit dengue and chikungunya. They’re Aedes species of mosquito. They like to bite in the morning and so using personal protection during the day time as well is important. And in terms of traveller’s diarrhoea, the old adage is ‘cook it, boil it, peel it, or leave it’. It's actually really difficult to do but if food’s just being cooked and is still very hot it's nearly always safe. If water's been boiled it should be safe. If fruit can be peeled that's always safe and there are some high-risk foods which people might be wise to not have on their trips such as uncooked seafood. The other thing that people can do is take some hand gel. So, if soap and water isn't available before they eat then they can use some hand gel to clean their hands. So, you know there’s quite a lot people can do to reduce their risk, bottled water, not cleaning their teeth in the local water in a developing country, all of those things.

Thanks so much those are all really great counselling points. Nick that's all the time that we have for today thanks again it's been a pleasure having you on the program.

The views of the host and their guests on the podcast are their own and may not represent Australian Prescriber or NPS MedicineWise. I'm Jo Cheah and thanks for listening.