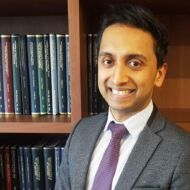 I'm Dr David Liew, your host for this episode. Today I'm speaking to Dr Chamara Basnayake, a gastroenterologist at St. Vincent's Hospital in Melbourne and we’ll be discussing his article in the October 2018 edition of Australian Prescriber on the treatment of irritable bowel syndrome. Chamara, welcome to the program.

Thank you for having me David.

So irritable bowel syndrome (IBS) seems to lead to a lot of confusion amongst patients and amongst some clinicians as well. So, what’s this enigma of a disease? Talk me through it.

I agree with you. This is the issue. There's a lot of confusion with patients about this condition. What irritable bowel syndrome is essentially gut symptoms in the absence of traditional anatomical or biochemical abnormalities. Now of course if we were to cut open people's intestines and look under a microscope and look at their microbiota it would be definitely abnormal and different, nonetheless based on the traditional medical testing you wouldn't find any abnormalities. Now the key thing about irritable bowel syndrome is it is the gut symptoms related to your large intestine we traditionally think of it as. It's characterised by symptoms of discomfort or pain related to defecation and it can be of one of three or four subtypes. We typically describe it as either a diarrhoea dominant or a constipation predominant. But I think the key point is finding what is the specific contributor to one patient’s symptoms and specifically targeting that, rather than using treatments as a blunt tool for all people with all functional disorders.

How would we go about in terms of a diagnostic approach to trying to make it a diagnosis of irritable bowel syndrome and being able to go about treating it?

You can diagnose it on the basis of simply the symptoms alone, and in a patient without red flags that's enough.

Irritable bowel syndrome should not cause bleeding and so anyone who has bleeding that should warrant an endoscopy. Anyone who has new gut symptoms above the age of 50 we’d say, or in fact anyone who has a significant family history of an organic gastrointestinal disorder, whether it be young family members with cancer or inflammatory bowel disease, that will also warrant at least specialist evaluation. You shouldn't get an iron deficiency anemia. That would also warrant endoscopy or at least a consideration, and patients shouldn't lose weight either.

I can imagine though that the majority of IBS patients don't have any of those red flags and the majority could initiate treatment with their primary practitioner?

That’s absolutely correct. Now the difficulty though is, many primary practitioners in particular will always have that sense of anxiety, well am I missing something here? Is this the patient with Crohn’s disease that I’m ignoring? And one way you can delineate that is just to simply do a basic blood test to see if there are any biochemical abnormalities, or performing a test called a faecal calprotectin. That's a faeces test which measures a particular marker, calprotectin, which is indicative of intestinal inflammation. And if that’s abnormal well then that would warrant a specialist to review the patient.

That's certainly reassuring for someone like me .hHw would you recommend that we approach the treatment of IBS?

So the first thing is to give the patient the diagnosis and be very clear about it. And that is to tell them that the condition is irritable bowel syndrome and to explain that the condition doesn't lead to cancer or doesn't lead to any major organic catastrophe. So that's number one. And the second thing is to explain why they have these symptoms and to explain it's in fact a very common condition in the community. And then the next step is to address the concerns of the patient. Well I think it is worthwhile asking the patient whether or not they want treatment. Some patients are satisfied to have the doctor explain to them that nothing is wrong. For the patients that need treatment it is an adequate history and examination to determine what the contributing factors are. So for some patients, I can give you an example – I had a patient a month ago who was consuming one kilogram of sauerkraut a day because they thought it would promote a healthy gut bacteria. Clearly that was contributing to their symptoms. We told them to stop that, 80% of their symptoms had been relieved. If you take an appropriate history you can determine both from a dietary history, toileting history and even a history of other psychosocial contributors, there may be certain things that need to be targeted and their particular response.

Where do we go from there? What's the role of dietary intervention? What are the roles of medications in IBS?

I think if the patient wants to be treated, usually I think a dietary intervention is an adequate and appropriate first step so the two diets that we would typically prescribe for this is a low-FODMAP diet or general dietary advice, and in the article I explain what's called a NICE diet which is the National Institute of [Health and Care] Excellence diet from the United Kingdom and that's mainly a very sensible diet which cuts out major contributors including caffeine alcohol and certain foods which may trigger gut symptoms. So just a sensible approach. So when you have a patient in front of you and you want to advocate for a dietary manipulation, if they have diarrhoea predominant irritable bowel then I think a low-FODMAP diet is an effective strategy. What it involves is a patient usually seeing a dietician, and that's what we would recommend, who would then explain what FODMAPs are. So these are poorly absorbed carbohydrates. They would ask the patient to reduce, not completely cut out, these poorly absorbed carbohydrates and then review the patient in six weeks. If there has been an improvement in symptoms, the dietitian will then carefully reintroduce foods that the patient is less likely to have symptoms from, and eventually a patient will be within a space where they've only just reduced the foods that cause them the most problem. There are resources on the Gastroenterological Society of Australia or GESA so if you just google GESA low-FODMAP there’s a basic printout of what’s involved.

Right, so what about the patient who doesn't get the relief that they want from a dietary approach? Where do we go in terms of medications?

So I think with medications the tried-and-true medications that we would use for functional gut symptoms in particular irritable bowel are a low-dose tricyclic antidepressant. So it seems to reduce the severity of the pain and in particular in diarrhoea predominate irritable bowel you will find patients will go to the toilet less frequently. Now it is critical that you tell the patients that this is not used to treat depression. So what I would tell a patient is this is a drug which I'm using to improve the pain and improve the contractility of their gut. I explain to them it's a medication that we use regularly not on an as-needed basis, that they take it at night-time, that the low dose is unlikely to have side effects, and we review them four to six weeks after starting it. It takes about that long before there's been an adequate effect. If the patient doesn't want to take a medication on a regular basis, that's a perfectly reasonable response in which case if you've excluded dietary therapies and excluded medical therapies you're left with behavioural or psychological therapies. What we have seen in studies is that short-term cognitive behavioural therapy in fact reduces symptoms for patients with irritable bowel syndrome and that's definite and that's significant and that's been repeatedly seen in studies. Now we think the mechanism of that is addressing some of the hyper-vigilance, visceral hypersensitivity and sometimes abnormal behaviour seen in patients with irritable bowel syndrome, especially severer forms. So it's in fact not harvesting a placebo response but it is treating a nervous imbalance in patients with irritable bowel syndrome. If I could make a separate point about the placebo effect – we know that there's a significant placebo response in patients with irritable bowel syndrome and in fact if you're just simply warm and empathetic and promote a positive response in patients, these are the patients who are most likely to have effective treatment of their symptoms.

Speaking of that potential placebo effect, where do probiotics fit in all amongst this?

Overall, I think it is probable that probiotics have positive effect on irritable bowel syndrome, but the effect is very modest. The issue is the studies all use different strains at different doses. The exact strain and dose can't necessarily be easily found in the pharmacy so it's hard for me to translate the studies into an adequate strain and dose for clinicians to use but it probably works and if a patient feels better as a result of taking it, I mean in my practice and certainly a lot of my colleagues wouldn’t stop a patient from taking probiotics.

What about rifaximin? Where does that sit in the algorithm? Does that really work like an antibiotic or is there something else going on?

The theory is that there is a microbial disturbance in some patients with irritable bowel syndrome and the particular microbial profile contributes to improper immune and pain-related signalling which then contributes to their symptoms. Some of the trials in this area have shown that there is a benefit of taking rifaximin over placebo but I should say two things. One, the effect size on a patient appears to be modest compared to placebo. The second thing is rifaximin is not subsidised under the PBS for this indication so patients will be paying out of pocket. Three, it's only really being examined as a treatment over two weeks and then patients are followed up a month later. The issue with rifaximin is there's no exit strategy, unlike the low-FODMAP diet, unlike say a tricyclic which we would typically de-escalate over a year. A particular therapy we haven't touched on, David, is gut-focused hypnotherapy. I do want to mention that briefly because in Australia there was a trial that examined a low-FODMAP diet against gut-focused hypnotherapy. So a psychologist puts a patient into a state of hypnosis then through persuasion treats gut symptoms and comorbid symptoms of anxiety, if they’re there. We found that patients who undergo this particular therapy are just as likely as patients with the low-FODMAP diet to have pain and bloating symptoms reduced and more importantly when you examine these patients five years down the track 70% of them still have adequate relief from their gut symptoms. So psychological and behavioural therapies are really quite effective. It's just unfortunate that they're not easily available. So if you're a patient and you've tried a few different things including diet, maybe some medications, it might be worthwhile seeing the specialist to potentially see whether or not you'll be applicable for this type of therapy. And I should make the final point, there are multidisciplinary functional gut clinics that manage irritable bowel syndrome in Australia and these are clinics where the gastroenterologists work alongside dietitians, gut-focused hypnotherapists, pelvic floor physiotherapists and even psychotherapists.

Chamara, that's been a fascinating insight into IBS. Thanks very much for joining us on the podcast.