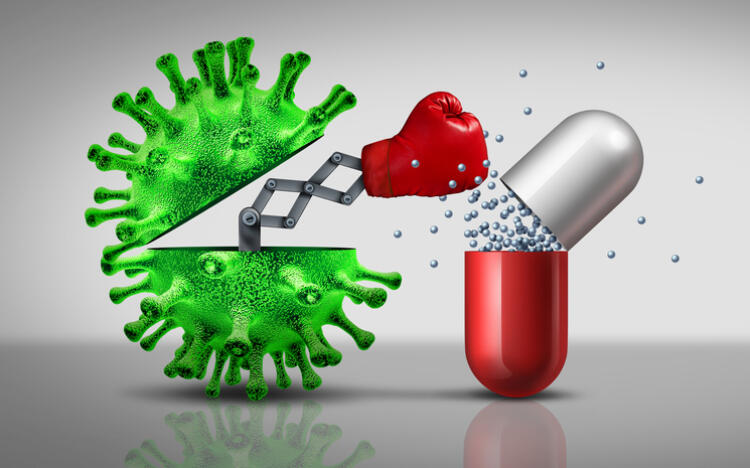 Antibiotics are medicines used to treat a wide variety of infections or diseases caused by bacteria. Since they were first introdu...

What every parent should know about coughs, colds, earaches and sore throats

Having a sick child can be a very scary experience for parents and carers. Understanding more about common childhood illnesses and...

Antibiotics don’t work for all infections

Antibiotics only work against bacteria. They don’t work against viruses, which cause common colds and flu. Taking an antibiotic when you don’t need one will not make you feel better or recover more quickly.

When you start to feel better it’s usually because your immune system is doing the work to fight your infection.

Find out more about how antibiotics work

The facts about antibiotics (Arabic)

The facts about antibiotics (simplified Chinese)

The facts about antibiotics (traditional Chinese)

How does antibiotic resistance happen?

Antibiotic resistance happens when bacteria change or mutate and become less sensitive to an antibiotic.

The more often antibiotics are used or taken incorrectly, the more likely it is that resistant bacteria will survive, grow and multiply. This can make future bacterial infections much harder to treat.

Mutated bacteria can also pass their genes to other bacteria, forming a new antibiotic resistant ‘strain’ of the bacteria.

Antibiotic-resistant infections are already seen across Australia, among hospital patients and people in the community, as well as in agricultural settings. Urgent action is necessary to tackle this growing problem.

Resistant infections could kill 10 million people world-wide each year by the year 2050 unless new antibiotics are developed.

Infection with antibiotic-resistant bacteria is associated with longer stays in hospital and a higher death rate. In Australia, the prevalence of multiresistant bacteria (also known as ‘superbugs’) is increasing, and more patients are getting staph infections that are resistant to multiple antibiotics.

If you have an infection caused by bacteria that are resistant to antibiotics, you are more likely to die from that infection.

Examples of bacteria in the community that have already developed resistance to a number of antibiotics include strains of Escherichia coli (E coli) that cause many urinary tract infections. Staphylococcus aureus, ‘Golden staph’, a common cause of skin infections, is another example.

Failure of the last-resort antibiotic treatment for the sexually transmitted infection gonorrhoea has occurred in Australia.

Coloured mucous or phlegm isn’t always a sign of a bacterial infection, and that also goes for other symptoms including cough, sore throat, earaches and fever. While some people with these symptoms will need antibiotics, most people won’t and will get better without antibiotics.

Green or yellow coloured snot can in fact be a sign that your immune system is fighting your infection, and not that your illness is getting worse.

There are actions that you can take to reduce the chance of resistance developing.

Antibiotic resistance can directly affect you, your family and the community

If you or members of your family develop an antibiotic-resistant infection:

Antibiotic-resistant bacteria can persist in your body for as long as 12 months and may be passed on to family members or others in the community.

The drug pipeline for antibiotics is drying up

In the last 50 years, there have been very few discoveries of new antibiotics.

In 2015, media reported the discovery of a new class of antibiotics, called teixobactin, as a ‘breakthrough’ and a ‘game-changer’. However the new antibiotic has not yet even been tested in people. So far it has only been shown to be toxic to bacteria in mice. It will be years before it becomes a viable treatment for humans.

This new antibiotic only works on certain types of bacteria (gram-positive), so it might help for some of the currently hard-to-treat infections, but not all of them.

For example, it is not effective against E coli (as that is gram-negative) which can be resistant to antibiotics.

In 2020, two new antibiotics were discovered from a family of antibiotics called glycopeptides, that are produced by soil bacteria. These antibiotics, corbomycin and complestatin, work by stopping breakdown of the cell wall in bacteria, which stops bacteria from dividing and reproducing. These antibiotics have shown some activity when tested in mice against drug-resistant S aureus.

The time it is taking for bacteria to become resistant to new antibiotics is getting shorter, so even if new antibiotics are discovered, this will likely become an issue again if we don’t change the way we use antibiotics.

How technology can help us find new antibiotics

Artificial intelligence has helped to identify a powerful new antibiotic called halicin. This machine-based process uses an algorithm that learns the properties of different molecules based on their atoms. The technology identified molecules which stopped the growth of E coli, and this is how halicin was found.

Scientists have said that this is one of the more powerful antibiotics discovered recently. Halicin was tested in mice and these studies showed it was active against different types of bacteria. One of these was Acinetobacter baumannii, a bacteria that causes infections we need new antibiotics to treat.

This is an example of how computer-aided drug discovery can help researchers find new antibiotics and speed up early-stage drug discovery.

Patients and doctors contribute to the problem

Research by NPS MedicineWise in 2014 showed that patient expectations lead many general practitioners to prescribe antibiotics when they may not be effective - contributing to the growing problem of antibiotic resistance.

The AURA report published in 2019 showed that among GPs participating in the MedicineInsight program, most antibiotics were prescribed for upper respiratory tract infections (39.5%). Interestingly, in the Therapeutic Guidelines, prescribing of antibiotics is recommended in 19%–40% of people with acute tonsillitis, but the data showed that 94% of patients with acute tonsillitis were prescribed an antibiotic.

Some doctors don’t believe their individual prescribing makes a difference, and some patients think antibiotic resistance is a problem that won’t affect them.

The reality is that antibiotic resistance is already impacting individuals and is a growing problem in our community. We all need to take personal action to preserve antibiotics.

This is a problem we can have control over. Actions we take as individuals can make a difference, because the more antibiotics are used, the more chances bacteria have to become resistant to them. This will make bacterial infections much harder to treat.

There are five things you can do to reduce antibiotic resistance.

#SaveTheScript was an industry-first short film competition, dedicated to raising awareness about antibiotic resistance. Together, Tropfest and NPS MedicineWise invited entrants to use their passion for creative storytelling to make a difference to our future by creating a 45 second short film to help raise awareness that antibiotics are losing their power.

The competition received recognition from global antibiotic resistance organisations. Jim O’Neill, Chairman of the independent Review on Antimicrobial Resistance commissioned by the UK Government (and former chairman of Goldman Sachs Asset Management) wrote in September 2015, “We need campaigns like the one introduced by the Australian organisation NPS MedicineWise, which held a competition for videos promoting public awareness of antibiotic use. The result was a series of short, witty films explaining simply and humorously how antibiotics can be misused”.

The finalist films can be shared to raise awareness on antibiotic resistance. Find them on our YouTube channel www.youtube.com/npsmedicinewise.